In the end, The Brookhaven Experiment is a joy to play, especially if you’re a fan of wave shooters and intense gunplay. Read full verdict

(Pocket-lint) — The Brookhaven Experiment is an intensely dark, atmospheric wave-based VR shooter for the HTC Vive and Oculus Rift.

The game’s story centres around an experiment gone wrong, which has torn a hole through the fabric of reality and let monsters and demons out and into our world. So yes, it’s basically Doom, but in virtual reality.

With a game that promises «situational horror» and «occassional pants wetting» you can more than assume it’ll be a thrilling pulse-raiser of a game. And, by jove, you wouldn’t be wrong.

Playing The Brookhaven Experiment you find yourself alone, in a series of desolate, dark and dangerously eerie surroundings fighting off waves of monsters. If you want a cheery Monday night in then, well, you’re prob best to go water your flowers in the garden instead.

The game requires room-scale playspace, but movement is mostly limited to a small area, and there isn’t much need to budge from the same spot other than to avoid demonic claws or duck and dive out of danger.

There’s a thin plot line, whereby a disembodied voice over a radio tells you where you are located and whyat the beginning and end of each wave of monsters. It’s then your mission to stay alive.

Each of the locations is dark and dimly lit — often set at night or in locations where light is inadequate, like in a basement or unpowered experiment facility — with just a torch and a single gun equipped to you. Life ain’t easy, eh?

The game’s audio is spookily fantastic, too. As hideous monsters lurch at you out of the darkness you’ll hear their growls and snarls and the heavy thud of their footsteps as they approach. You need to have eyes and ears in the back of your head for this one.

Wave-based shooters often suffer from issues with replayability, especially when the waves of enemies are predictable and consistent. Eventually, you’ll learn how to shoot, what to shoot and when, and how to survive for the longest possible time. That’s when things usually get a bit samey and dull. However, The Brookhaven Experiment doesn’t necessarily suffer from this potential problem in the same way other wave-based VR shooters.

That’s because of unlocks. Throughout the levels, you’ll find hidden items tucked neatly nearly out of site. They aren’t obvious, but they’re worth finding as shooting them unlocks new weapons, attachments, charms and ammo — all of which upgrade your guns and make them more effective.

Unlockable weapons mostly include small calibre guns, so don’t expect to be flame-throwing monsters or firing grenade launchers wildly to destroy your foe. But there are mines, grenades and other throwable weapons aimed at dealing with harder waves of the bigger, tougher baddies. There’s also an under-barrel light attachment for your pistol, for instance, which makes it easier to see and shoot your enemy without using your torch.

In addition to unlocks, the challenges and achievements keep the interest going. There are achievements that help push these boundaries — finish a nighttime mission without turning on your torch, survive a campaign level only using a knife, acquire all the guns and upgrades, and so on — which really add to the game’s depth and the sense of achievement you get when playing it. Outside of the main campaign, there’s also «survival mode» which, as you can imagine, involves surviving wave after wave of enemies for as long as possible. That’s a lot of fun too.

The Brookhaven Experiment is a joy to play, especially if you’re a fan of zombie shooters or enjoy fighting off waves of terrifying monsters.

There’s no much of a story, but what did you expect? This game is all about intense shooting action. It’s one of those games where you quickly work up a sweat. Ducking, dodging, kneeling and popping off bullets at demons quickly becomes tiring, but it’s never not fun.

For a wave-based shooter there’s plenty of longevity thanks to unlocks and challenges, too, which will keep play fresh throughout its 10 campaign missions. Well, fresh if you can keep your kecks dry.

The Brookhaven Experiment is available to play on both HTC Vive and Oculus right and can be purchased from Steam for £14.99. 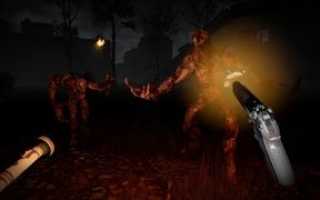